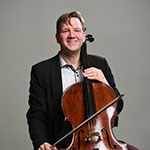 Hailed as a “Rock Star of the Cello” and noted for his “spirited and fiery performances,” Rafael Hoekman’s varied career as a soloist, teacher, chamber musician and orchestral cellist has taken him on a journey across Canada.

Rafael is a passionate teacher and enjoys working with aspiring cellists as a faculty member at the University of Alberta and across the country at festivals including the Kincardine Music Festival, Southern Ontario Chamber Music Institute, and Music at Port Milford. Rafael lives in Edmonton with his wife, cellist Meran Currie-Roberts, and their two children, Sam and Anastasia.

British-born Jeremy Spurgeon studied at the Royal Northern College of Music, Manchester and the Geneva Conservatoire where he gained the Premier Prix de la Classe de Virtuosité. In 1980, he took up the position as director of music at All Saints’ Cathedral, Edmonton. He has appeared in concert with many Canadian and international ensembles, singers and instrumentalists, including the Netherlands Chamber Orchestra, Stockholm Chamber Choir, Edmonton Symphony Orchestra, Calgary Philharmonic Orchestra and Edmonton Opera. Jeremy has performed as piano accompanist and organist in Canada and around the world.

Remembrance Day 2020 with the Lady Larks

The Lady Larks were originally inspired by the music and energy of close-harmony singing groups such as The Andrews Sisters. The vocal quartet has toured Interior BC, Vancouver Island, the Fraser Valley, including veteran centres and seniors’ facilities in their tour. In the Lower Mainland, the quartet has performed for the Harmony Arts Festival, Centre Stage at the Surrey City Hall, with the Vancouver Thunderbird Chorus, the Langley Barbershop Society, the Richmond Singers and many other local singing ensembles and organisations. In addition to public performances, they have mainly partnered with Health Arts Society of BC over the last decade, to bring their lively choreography, energy and humour to residents and seniors living in hospitals and long-term care homes. Over the years, the Lady Larks have been honoured to perform for hundreds of veterans and their families at various branches of the Royal Canadian Legion in BC and at an annual event for the George Derby Centre for Canadian Veterans of the Armed Forces. 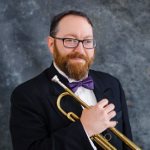 Trumpeter Joel Gray started playing professionally at the age of 17, and has shared the stage with some of the world’s finest artists, including Tommy Banks, P.J. Perry, Slide Hampton, Diana Krall, Nikki Yanovsky, Jens Lindemann, Allen Vizzutti, Rollanda Lee, and commercial talents Gino Vannelli, Frank Sinatra Jr., the Temptations, and Wayne Newton. Joel was recently a featured soloist with the Edmonton Symphony Orchestra performing “A Tribute to Louis Armstrong” and played with the ESO in their Carnegie Hall debut in 2012. 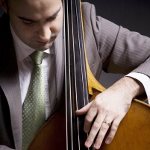 Bassist Josh McHan has performed with a number of high-profile jazz artists including Shai Maestro, Jacques Schwarz-Bart, Mike Murley, Gene Bertoncini, and Mike Rudd. He is also a member of several groups including The Writers’ Guild and A/B Trio, both of which had albums nominated for Western Canadian Music Awards for Jazz Recording of the Year in 2015. He is in high demand as a sideman for various singer/songwriters, performing both live and in the studio. In 2013, he received his Masters of Music degree in classical performance from the University of Alberta. 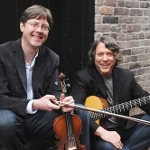 Cameron Wilson is a violinist/composer currently residing in Vancouver.  He is a member of the classical crossover piano trio JOE TRIO, the gypsy jazz quartet Van Django, the Hard Rubber Orchestra and Francophone inspired trio Pastiche.  His compositions and arrangements have been performed by numerous symphony orchestras and ensembles across North America.  He has collaborated with CBC storyteller Stuart Mclean on A History of Canada and I Remember Wayne and has recently co-written a film noir opera called Supernatural Noir with playwright Kico Gonzalez Risso.

Guitarist Budge Schachte has worked with a stellar cast of diverse artists from poets to symphony orchestras and musical colleagues across a wide variety of types of music, and has toured with them in Canada, the US, Europe and China. Budge’s playing is featured on a number of film soundtracks, and he recently composed, played and recorded the soundtrack for the feature film “Love And Other Dilemmas.” Budge co-leads the Gypsy Jazz group “Van Django,” an acoustic string ensemble. They have recorded live CBC radio shows for “Hot Air” and “Westcoast Performance,” as well as two CDs.